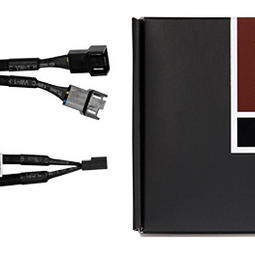 The NA-SYC1 is a fan accessory set consisting of two fully sleeved NA-YC1 Y-Cables for 4-pin PWM fans. The NA-YC1 Y-Cables make it possible to run two 4-pin PWM fans on a single fan header and to let the mainboard control the speed of both fans simultaneously. Multiple NA-YC1 can be daisy-chained to control more than two PWM fans via one header.